In this day and age, Mother’s Day is almost as big a celebration as many major festivals, with restaurant lines going round the block, and big discounts on everything from jewellery and fashion to spa packages, bird’s nest concoctions and even massage chairs.

But there’s a segment of mothers that aren’t getting flowers or chocolates this Mother’s Day. We’re talking about the mothers of animals in the wild that are captured or murdered by poachers to supplement the growing illegal wildlife trade. But that’s not all; orphaned young animals are now also being caught, ending up in pet shops and the ilk because of society’s increasing need for cute, cuddly companionship.

This year, however, they will be getting a voice. 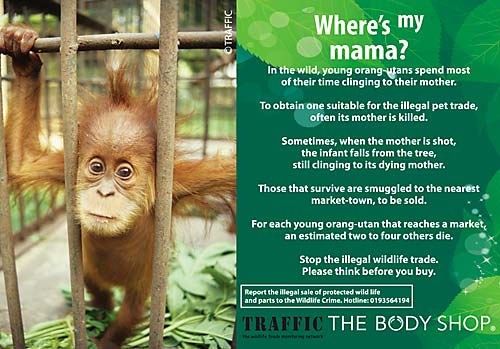 Staying true to its brand ideals and commitment to environmental and animal protection, the Body Shop, in collaboration with TRAFFIC South-East Asia, the wildlife trade monitoring network that works to ensure that trade in wild plants and animals is not a threat to the conservation of nature, has launched the aptly named “Where’s My Mama?”

Aimed at raising awareness on the illegal wildlife trade as well as the impact it has on endangered animal species, the campaign features the orang-utan, tiger and bear. Like humans, these animals learn all their survival skills from their mothers, so when, for instance, a tiger cub loses its mother to a poacher, it will be left to fend on its own in the wild. The survival rate, as it stands, is extremely low.< The Body Shop will feature campaign posters and recycled bags at its 58 stores in Peninsular Malaysia, while TRAFFIC Southeast Asia has been running an online awareness campaign on its Facebook page.

This is just one example on how a major brand can use a joyous festive occasion to highlight a powerful, relevant cause that isn’t just an extension of its ideals, but also builds equity with its consumers.

So, what’s YOUR brand doing for Mother’s Day?
We hope it’s something that will make Mama proud.

Have a wonderful Mother’s Day celebration.

How would your brand participate in the golden age of the geek?

Don’t want to miss out on the weekly shots of branding? Subscribe to our e-newsletter.


Warning: count(): Parameter must be an array or an object that implements Countable in /home/uniqwebs/gan4hire.com/wp-includes/class-wp-comment-query.php on line 399