No more Twitter or Facebook updates, no more catching up with friends, no more news or interesting stories on who did what and where – a digital death.

Ironically, it was with this very concept that BuyLife managed to raise funds to fight HIV/AIDS in Africa and India.

A campaign unlike any other, it actually latched onto the truth that many peoples’ lives are highly dependent on social media platforms such as Facebook and Twitter. By allowing users to experience “death” of their virtual selves, the impact of buying life becomes even bigger than before. 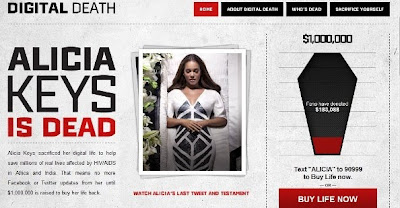 Throngs of celebrities (photographed in coffins) and fans alike gave up access to their Facebook and Twitter accounts and submitted to digital death in an effort to raise funds that will bring critical care and medicine to millions. 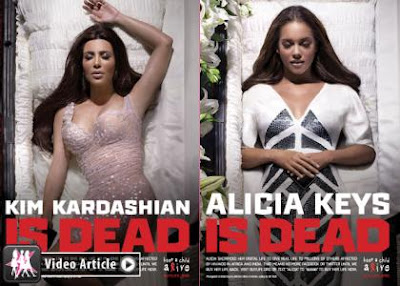 After leaving their Last Tweets and Testaments, they depended on both fans and friends to resurrect them by buying their lives back. 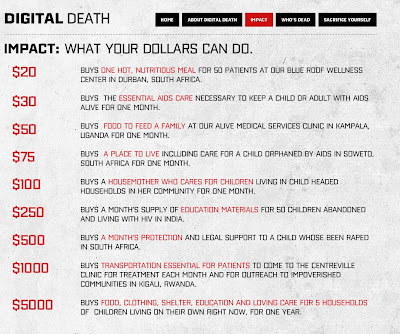 Celebrities, such as Alicia Keys here, are pictured to be well and alive again. Bear in mind though, that the cause is still ongoing even after they’ve well-exceeded the targeted amount of donations! 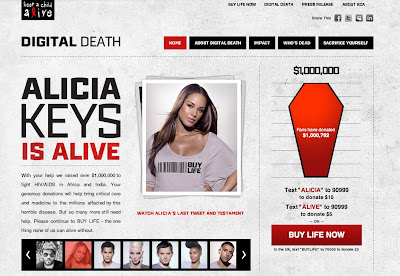 To experience Digital Death and save a life, click here.

How would your brand participate in the golden age of the geek?

Don’t want to miss out on the weekly shots of branding? Subscribe to our e-newsletter.


Warning: count(): Parameter must be an array or an object that implements Countable in /home/uniqwebs/gan4hire.com/wp-includes/class-wp-comment-query.php on line 399